With smartphones being ahead of the market, most organizations are embracing ways to integrate mobile applications into their business operation to improve their customer engagement. Obviously, establishing a powerful mobile presence is no longer acceptable and organizations need to see the development of mobile apps as a core prerequisite for success.

However, with the decision to build a mobile app there are several major options that need to be created to grab mobile phone users ‘ attention adeptly.

You have to determine how you want to develop and deploy the application before you go for application development.

If you’re curious whether you can bring your new mobile app in the native or hybrid way you will find this article particularly interesting and helpful.

Each one of these strategies on mobile application development will have its own advantages and disadvantages. In this article we will go into them in-depth to clarify which approach is appropriate with what purpose.

Let us guide you, alongside their advantages and disadvantages on hybrid and native applications.

A Native App is a mobile application specifically designed for a mobile platform. It is usually written in one programming language.

Native apps deliver reliable results relative to several other product types and are much more robust. Various programming languages are being used, based on the platform an application is built for. For example,  In iOS Mobile applications, objective-C, and Android Mobile applications, Java is used.

We have listed a few advantages below of native app development.

The application which has been developed and designed for a particular platform will convey an extremely superior performance. To obtain good performance, developers struggle with their power and storage consumption.

Native apps however are running fast, not just because of optimizations but also because of the coding itself. It operates better because it’s composed in the platform-supported native language. What’s even more interesting is that this leads to a faster way to integrate new features.

Many users don’t know about the technology they are using to operate the apps. They ‘re all interested throughout the customer experience as a whole.

Native apps have top-notch user experience as they are intended for a specific app store.  Developers and Design engineers can concentrate their attention on customizing the functionality of the app towards one platform and has its own language of design.

If you are searching for reasons why native apps are superior, we will emphasize that they also have complete access to hardware features. In addition to this, their use is not restricted to plugins or even other resources from third party companies.

Incorporating native apps with the functionality of a smartphone is much smoother than what the other forms of applications would deliver.

We have listed a few disadvantages below of native app development.

Cost is probably the most significant component influencing the way companies develop  apps. The native app development process is complicated and needs the involvement of highly skilled professionals. Therefore you can expect substantial expenditure.

Developers possess experience in developing apps just for a project. This means if you’d like an app for different platform styles, you have to get multiple developers can work on them. This will definitely increase the budget.

Native apps need much more development time. It is not easy to develop an app that meets the specifications of one specific operating system.

If a development team wanted to make native apps both for Android and iOS, two distinct native apps would have to be developed. Which might evidently take far longer time and energy than building a smart cross-platform app with reusable source code. Each platform code has its own development environment and updates increasing effort and money for development.

Google Maps, is an example of Android and IOS Native apps.

What is Hybrid Mobile App

One app for various platforms will be developed in the Hybrid app. If it’s iOS or Android, that implies only one app would be enough to meet all of the objectives.

They are developed with the help of an integrated web technology service such as JavaScript, HTML and CSS. But theoretically, hybrid apps are websites that are placed in a native app to appear and work exactly like them. Hybrid apps however, utilize cross-platform features and then use a single coding standard to span various platforms.

We have listed a few advantages below of hybrid app development.

If you’re low on resources then the best solution for you would be hybrid app development. You don’t really need to employ various developers to work on different platforms of the operating system.

Because of the one codebase, it is feasible to integrate the hybrid application that runs both iOS and Android for about the same time period that is designed to develop one native app with one platform. The development time has a direct impact on the product’s final cost.

Hybrid apps take as little time to be developed and are created at a relatively lower price than the native app.

During development, hybrid apps don’t consume much of your time. You can get the app onto the marketplace in a short amount of time.

The reality of this is that hybrid apps are capable of using a common codebase to operate on different platforms which can reduce time.

We have listed a few disadvantages below of hybrid app development.

The need for Internet

Hybrid apps are sites at their root, which involve a consistent connection to the internet to provide users with the full spectrum of functionality.

That is why the hybrid technique supports content-oriented applications possibly the best. They are very easy, and just not overloaded to operate quickly enough through complicated functions.

Generally, hybrid apps add an additional layer between both the target system and source code which also ultimately leads to at least a certain loss of performance.

Ironically, the customer experience is not the defensive side of hybrid applications because the interface will reach somewhere within the center, both for ios and android devices.

As the architectural design of hybrid mobile applications, they depend on plugins to connect a device’s built-in features. The downside to such a system is that some extensions can be obsolete or ineffective. In addition, developers may have to create plugins through their own if there are no ready-made methods that allow users to access a certain part of the functionality of the device.

Instagram and Gmail are two famous examples of hybrid apps.

The choice of an app’s preference depends primarily mostly on the organization’s requirements. It’s important to know the distinction of each alternative choice in order to find the correct option and then you’re trending in the right direction.

At Norgic, we can help you to choose the right mobile app development. If you want a perfect idea along with its implementation fell free to contact us.

Hopefully, this article will help you pick the right way. 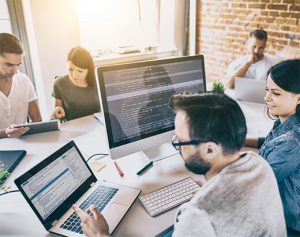